This is the longest and most scenic of the three minor canyons immediately south of Monarch Canyon. In the middle section, between the two big dryfalls, there are “marbles” – beautiful marble ledges and chutes. It is also the most challenging hike of the three; a high dryfall one mile into the canyon requires a long bypass over steep terrain.

Walk a bit north of east, toward the mountain front. You will see a flat-topped, pale mesa ahead at the foot of the mountains – the route goes just around the north (left) side of that. After a half-mile or so you will cross an old road; you can follow it north, but turn off where it passes the white mesa. Cross the low hills north of the mesa, and drop into the wash on the other side. 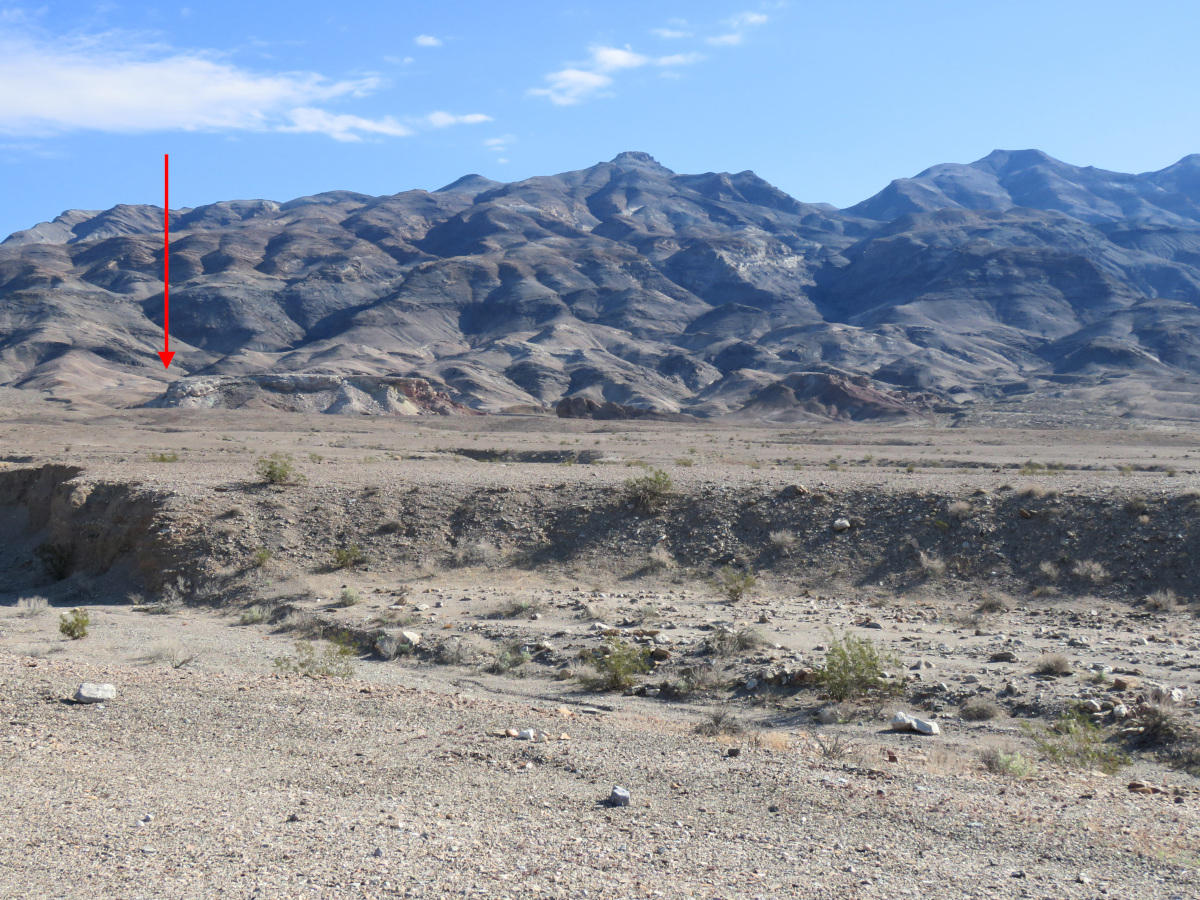 Head up the wash. The first mile of the canyon has lots of small ledges and dryfalls, none of which are difficult. Then a stepped bedrock chute appears, with huge boulder, and above it a reddish ledge. 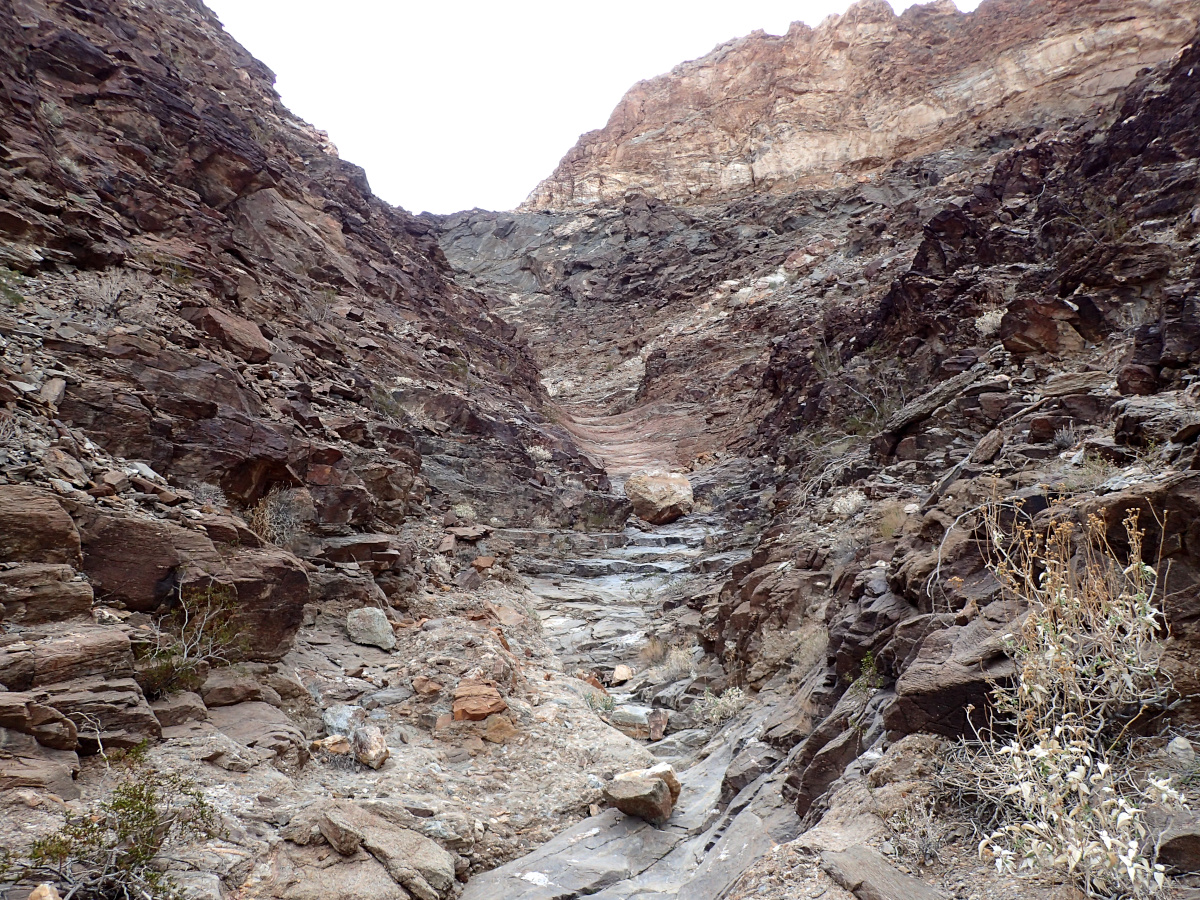 The reddish ledge is an easy friction climb. 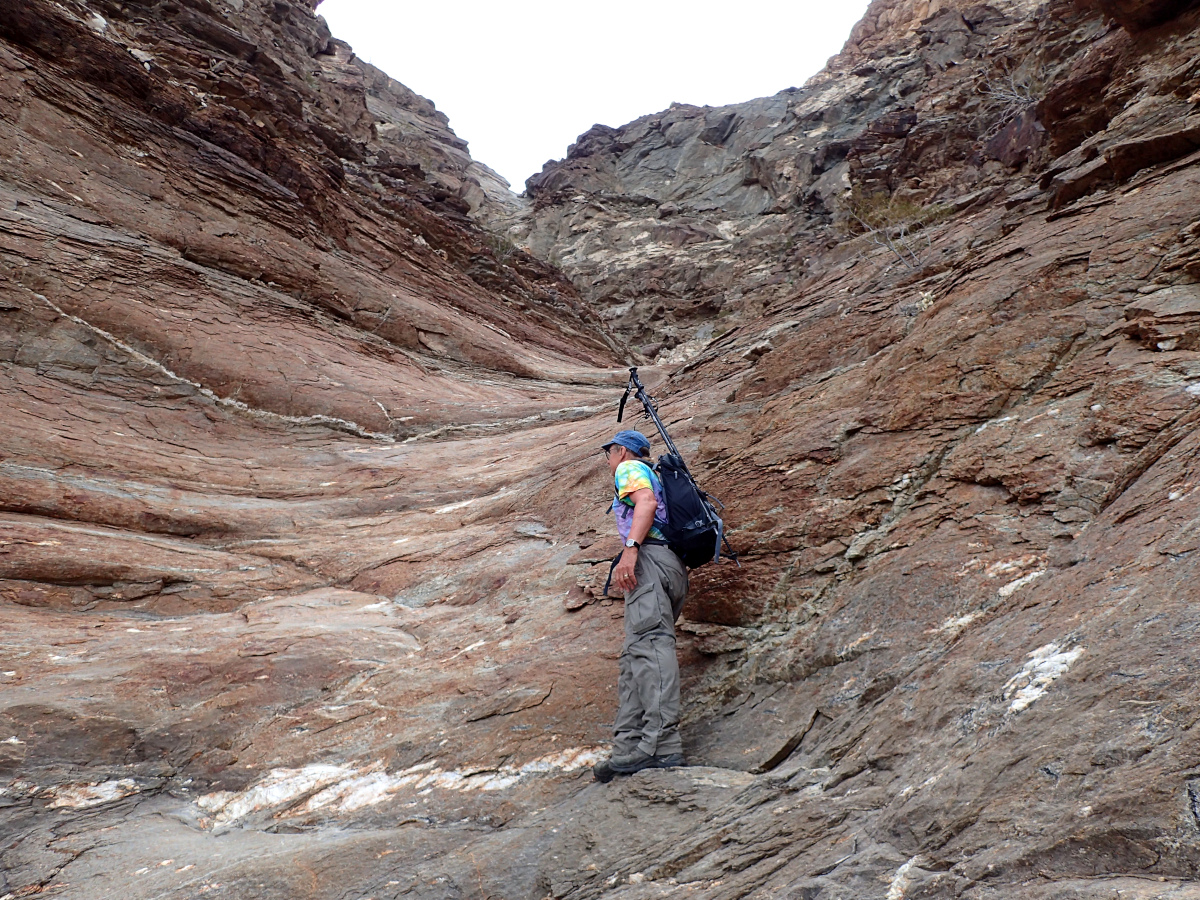 Above it is a steeper, layered fall, and above that is a towering near-vertical dryfall. 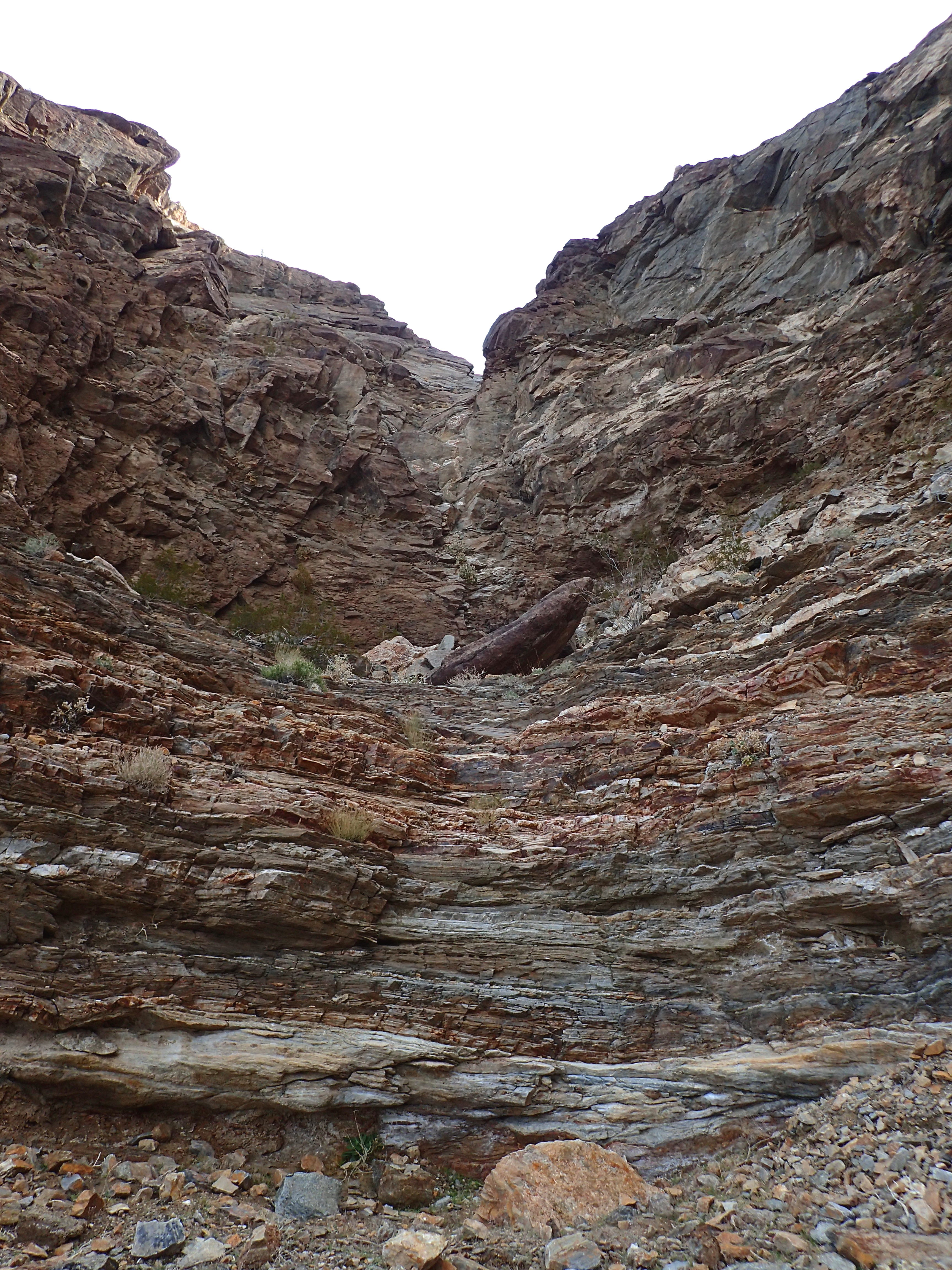 To bypass this beast, go back down-canyon about 200 yards, where a nose of the north ridge comes down to the canyon floor. Go past the big boulder on the hillside (shown below) and find a way up the slope to the right. 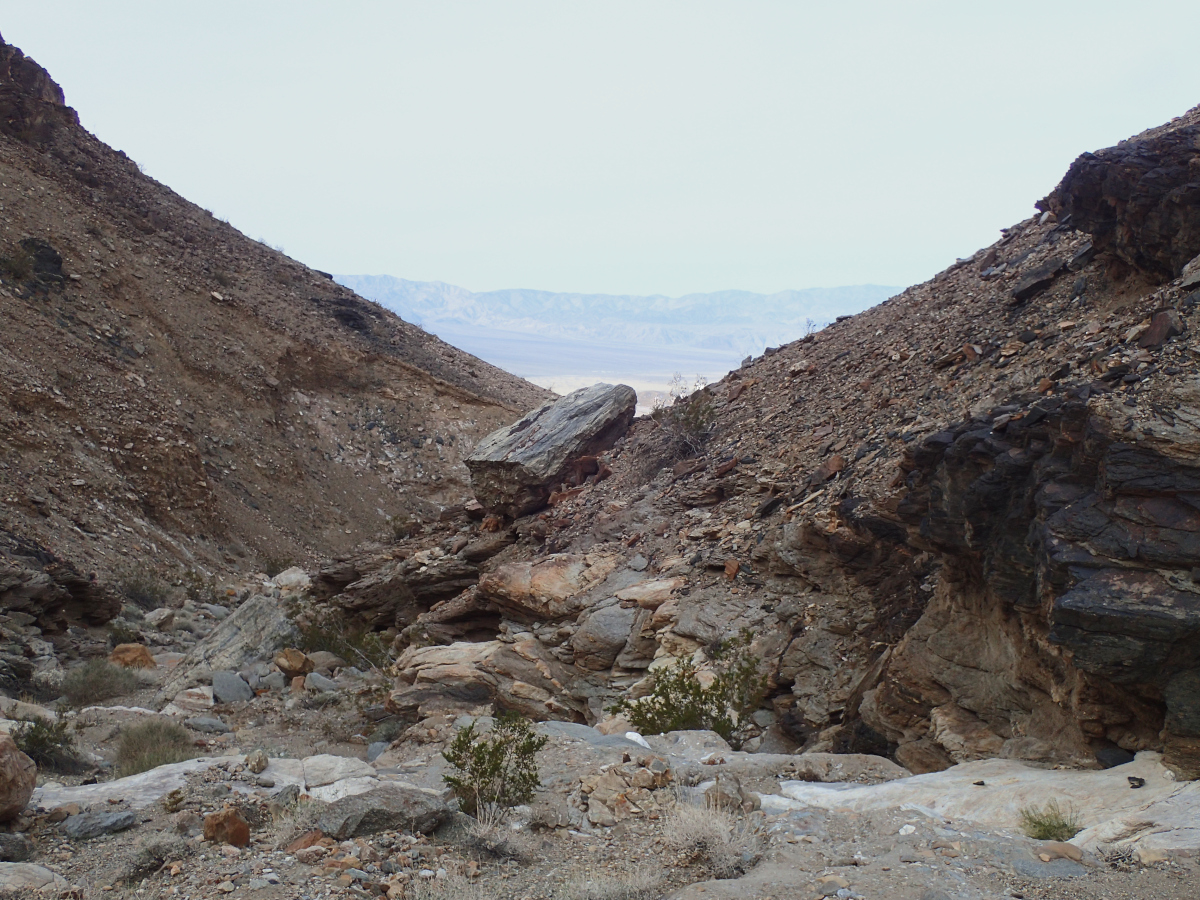 Head uphill. The lower part of this bypass is easy, but it gets steeper as you go up. Below is a schematic view of the approximate route, sketched over a satellite view. The big boulder is at the left end of the route. 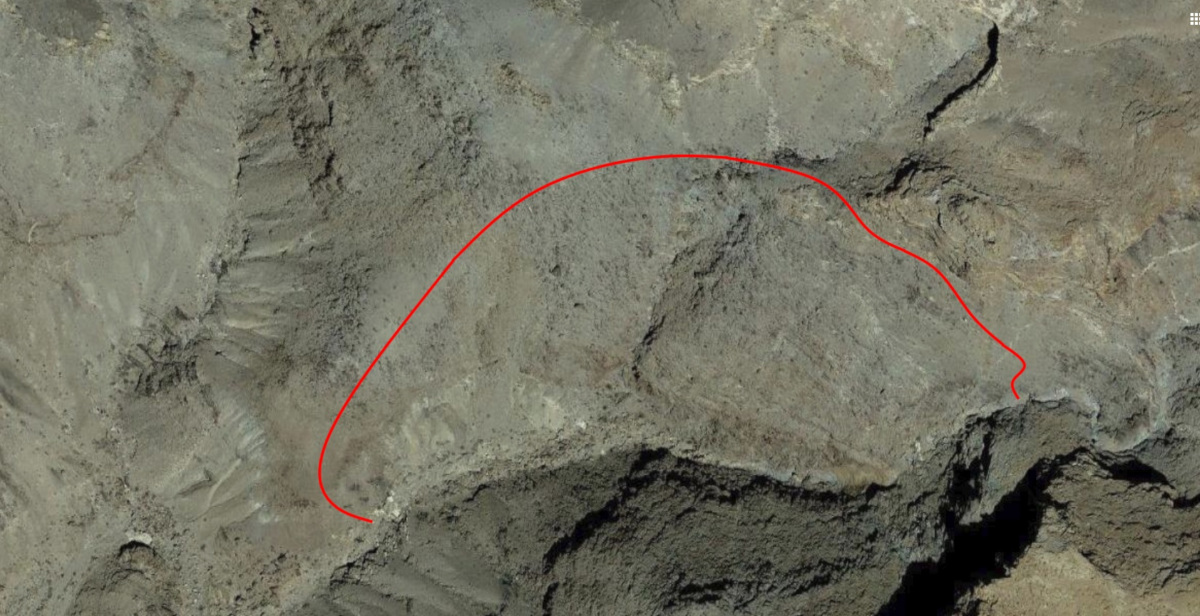 The first leg of the route is up the hill to the visible skyline in the image below. The rock is decayed schist, splintered and rotten. It will not be your friend. At first the angle steepens into some low broken cliffs. Past that, shown approximately by the red arrow below, the angle eases a little and you can begin a traverse to the right. 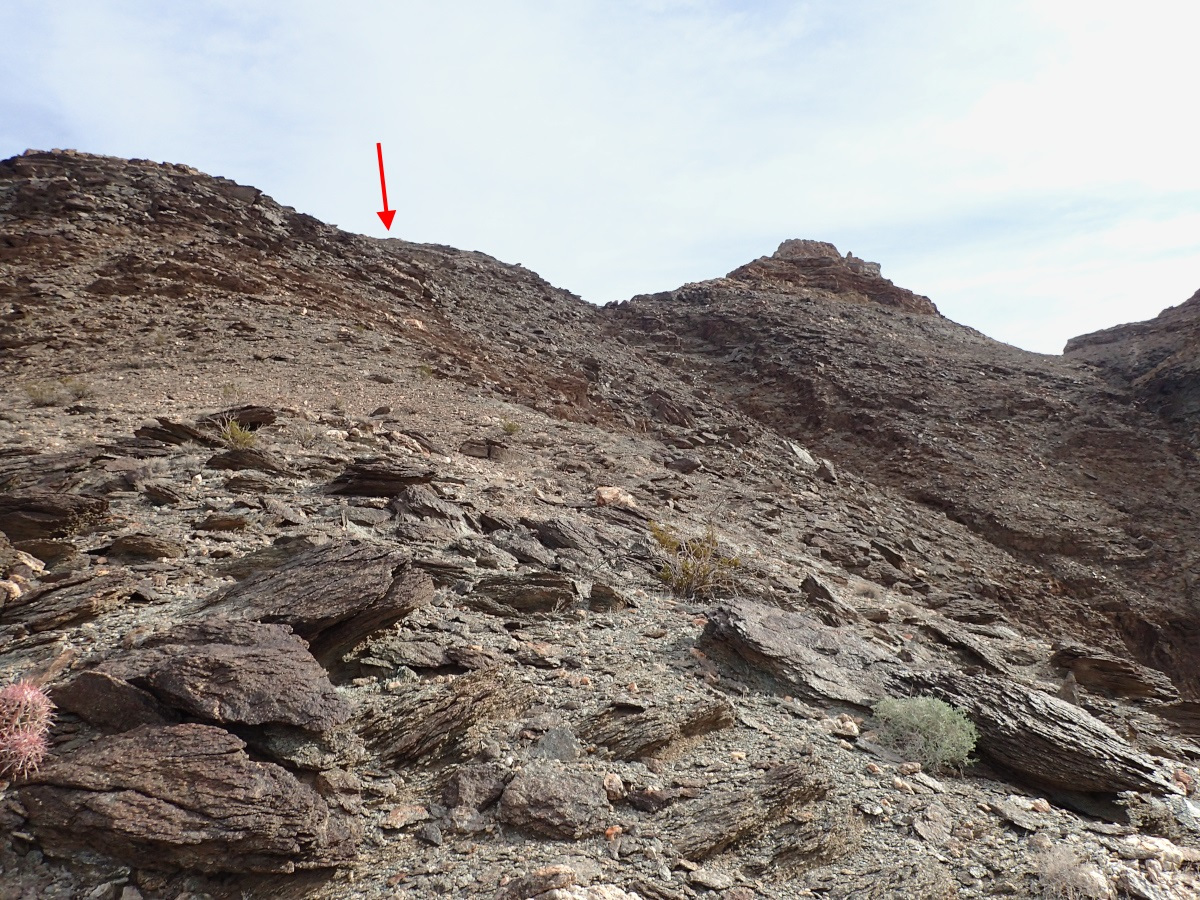 A gully cuts the slope on the right; angle toward it but make sure you are heading above the steepest part of the gully. That’s a cascading dryfall. (Only the steep part of the gully is visible in the image above, slanting across below the prominent “castle” on the skyline.)

The picture below, taken from higher up, shows the approximate spot you’d cross over to the gully. 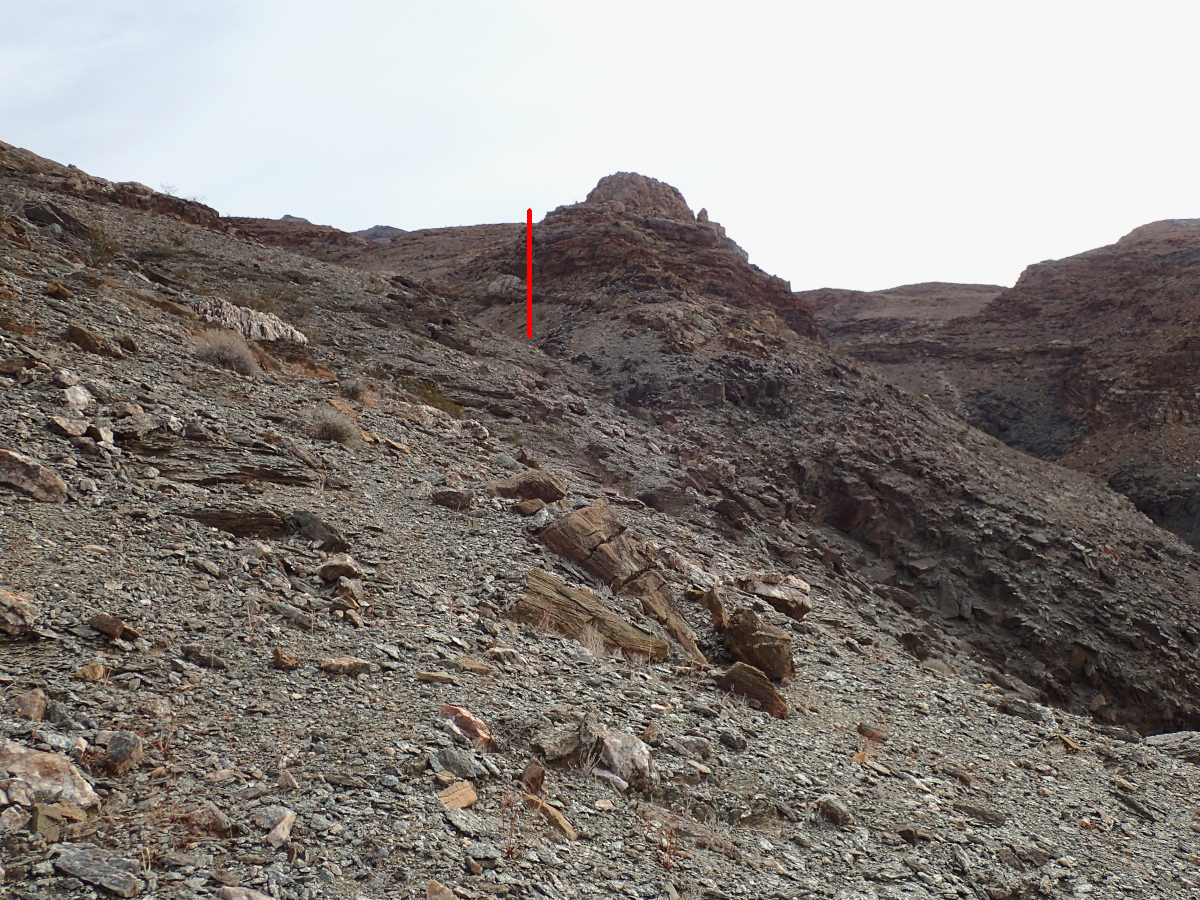 A sheep trail, although not very visible in the image below, crosses just above the dryfall at the top of the steep gully. Follow the sheep! They know what they’re doing. 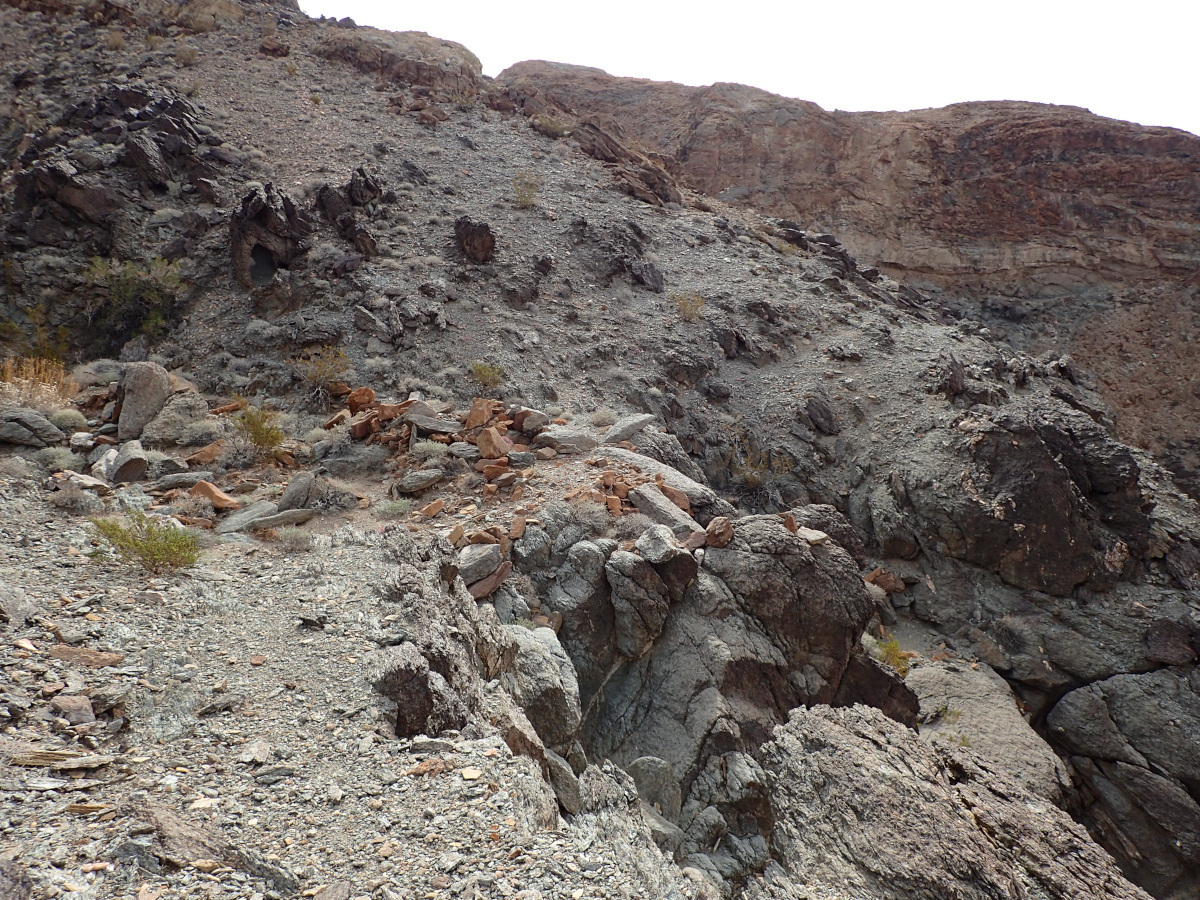 Now cross below the yellowish cliffs of the “castle” (not visible in the image above – it’s above and to the left), and traverse the slope beyond. There are faint fragments of sheep trails across the hillside, but it’s steep, the trails are about six inches wide, and you’re still on that rotten schist. Take it easy. When you are up-canyon from the big dryfall, trend downward and descend. The last step is down into the gorge, still following the sheep, over some cliffy little ledges.

The bypass took me 45 minutes, end to end.

Right at the lip of the dryfall, canyoneers have built a deadman of piled rocks, and set a rappel anchor. 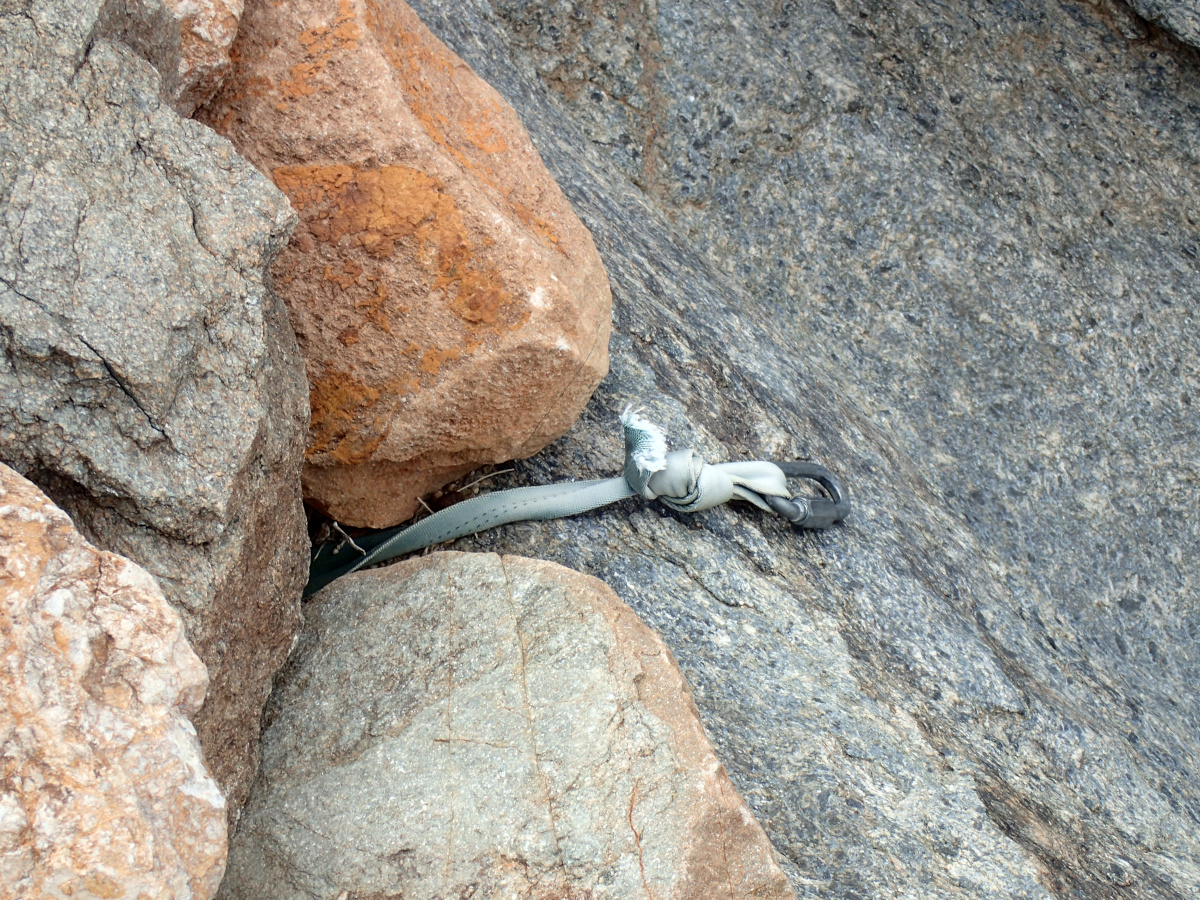 The twisty little gorge above the dryfall calls for some scrambling, and a few short work-arounds for small dryfalls.

The sheep have been here before you, so follow their faint trails around the ledges heading up-canyon. There is one awkward spot where you must pass above a cleft which falls vertically to the canyon below; don’t step on the obvious small boulder, because it is loose. Heck, by the time you read this it may have fallen down the crack into the canyon!

Above this fall the canyon becomes prettier. The walls change to orange, yellow, and cream limestone and marble. 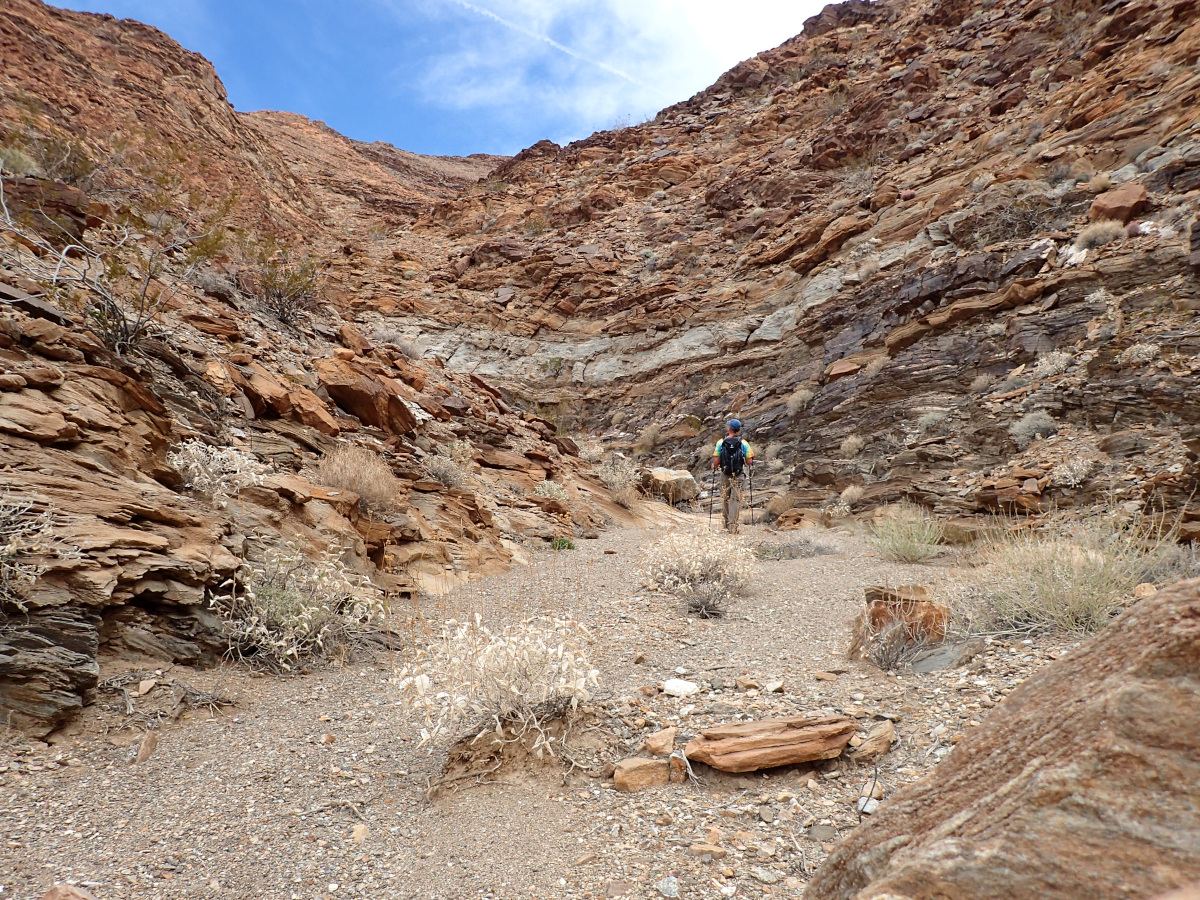 There are long ramps and chutes of smooth stone. 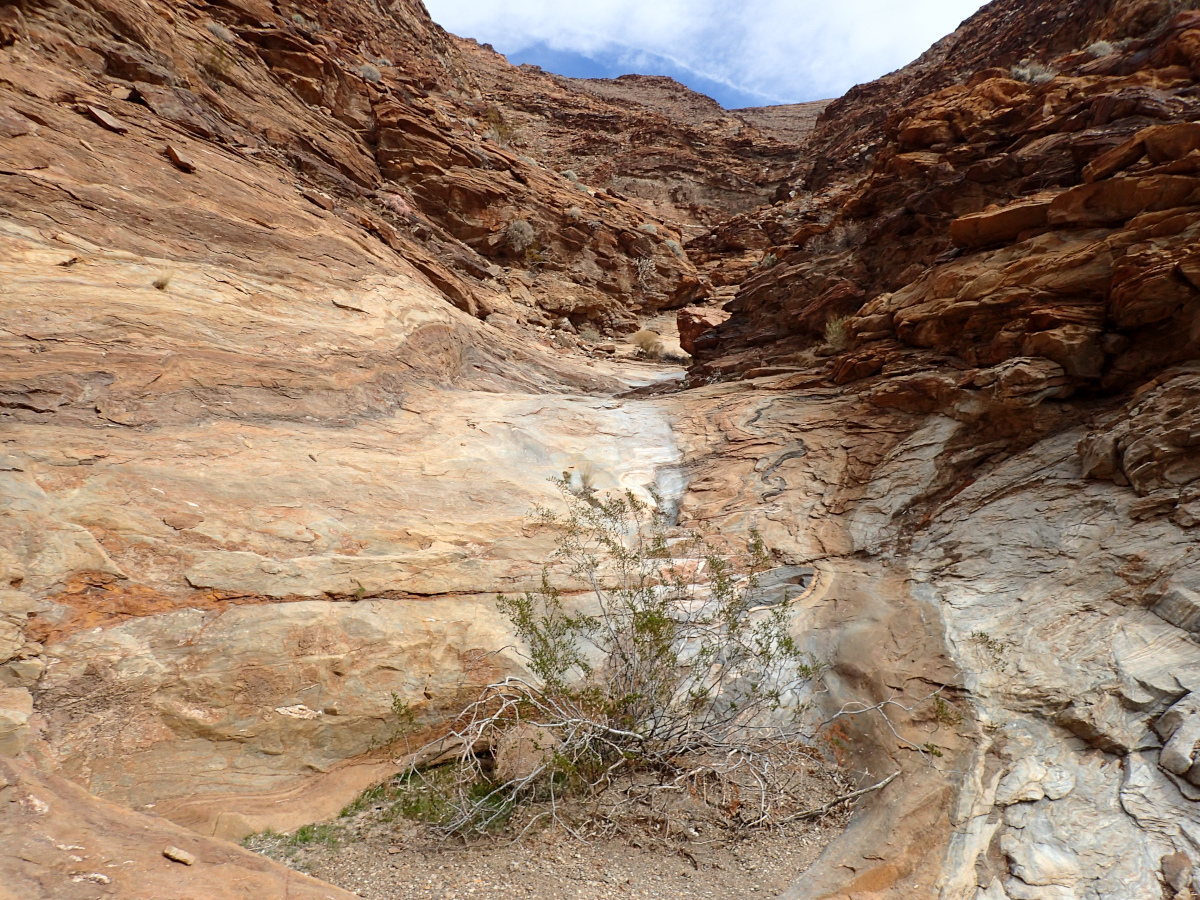 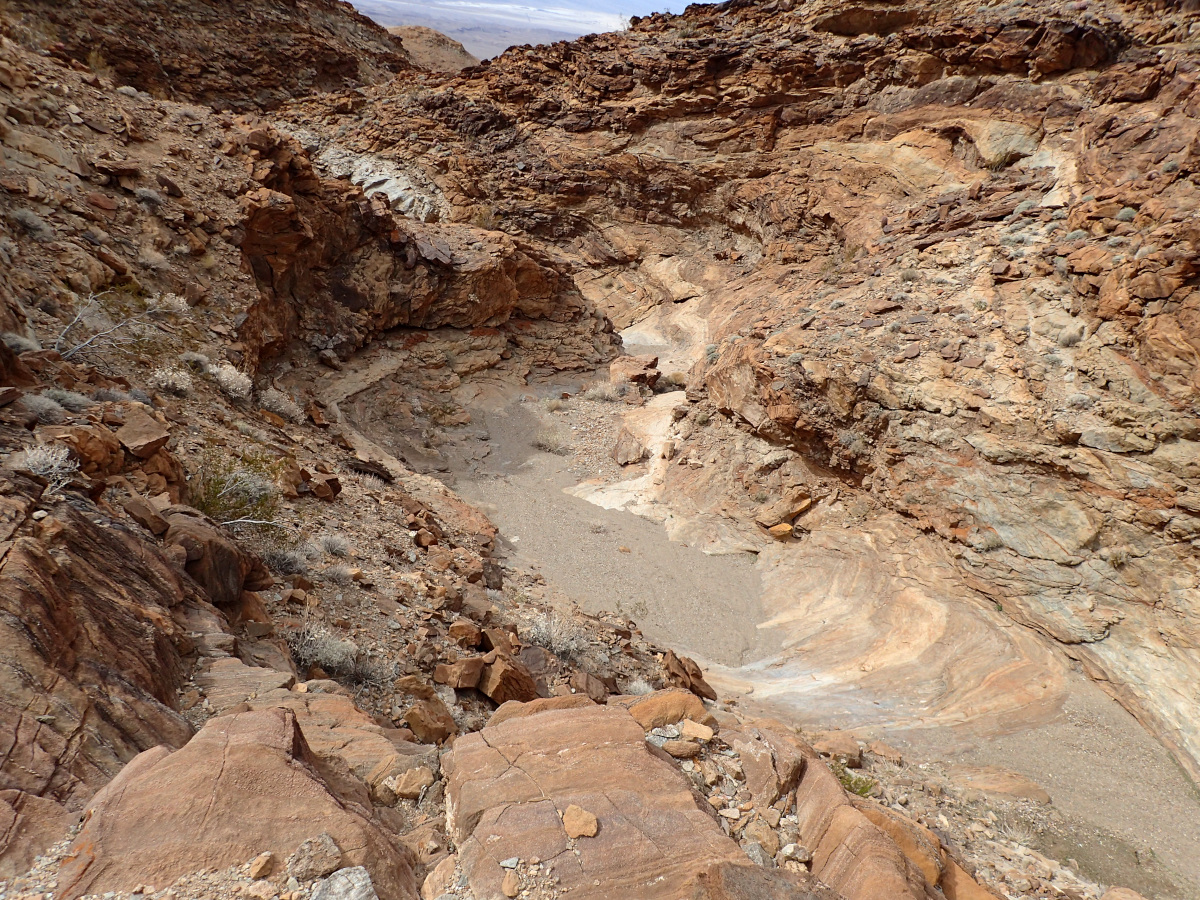 The patterns in the stone are lovely. 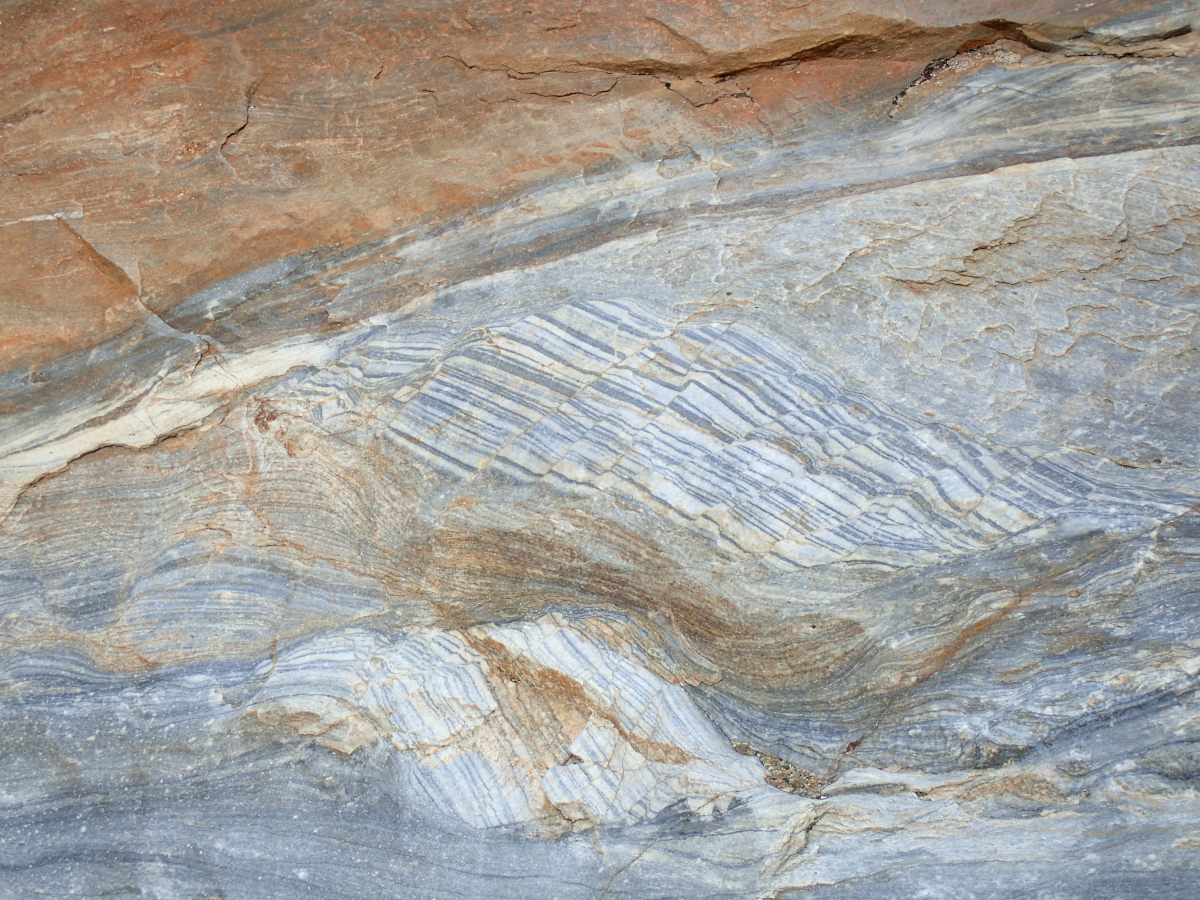 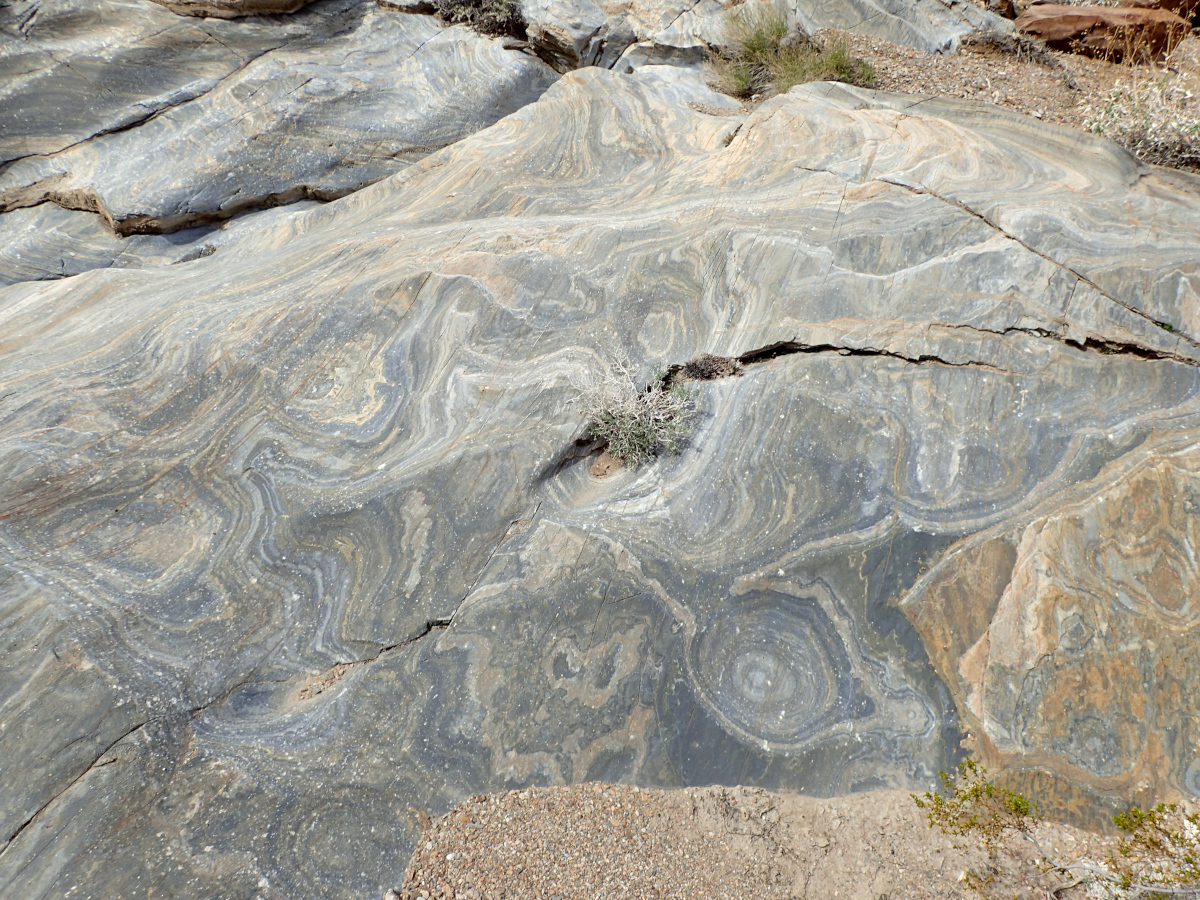 This nice scenery goes on for a little over half a mile, but then a boss dryfall appears. Like Jeff Goldblum, it is tall, complicated, and overhung at the top. 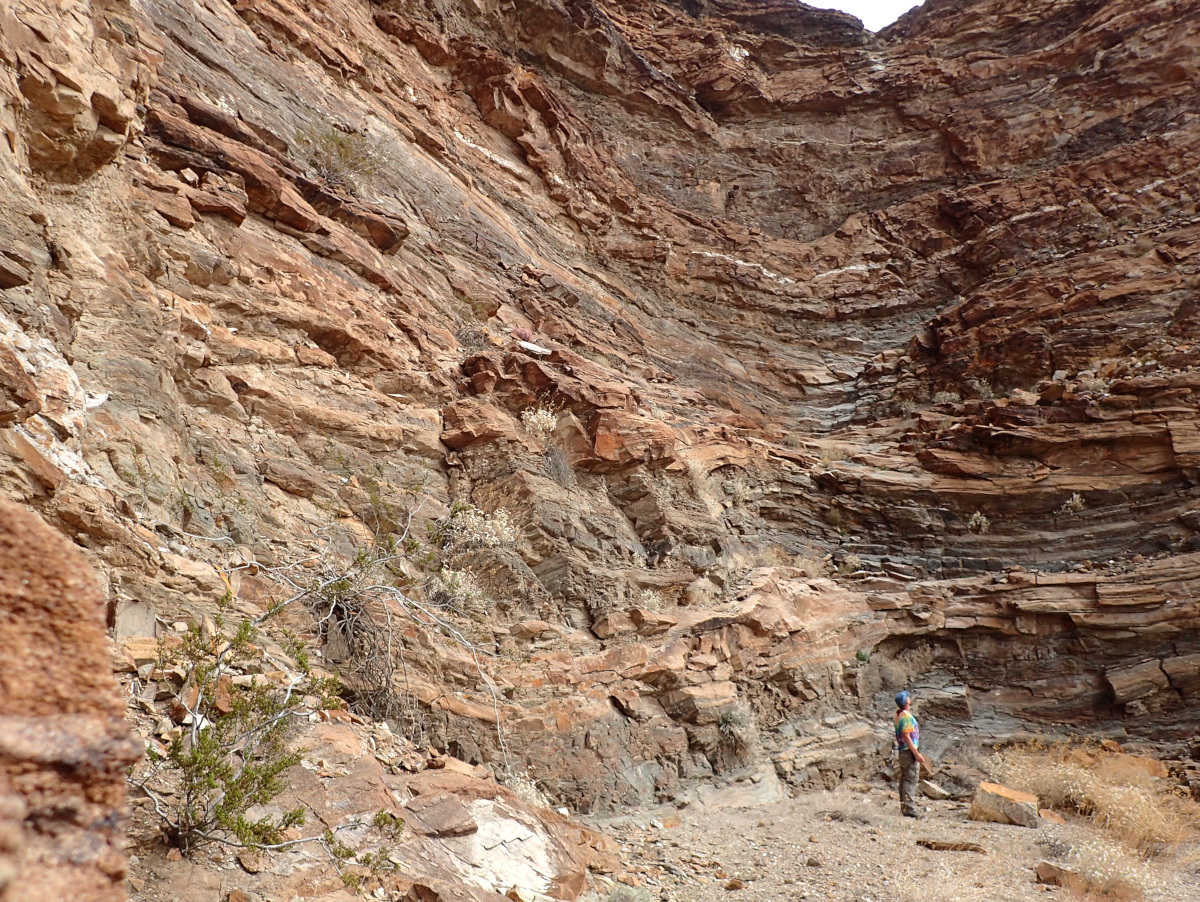 There just might be a bypass on the left side (looking up-canyon). From below, it starts as a blocky talus slope. But to me it’s not at all clear that it gets through to the top of the dryfall, and I had run out enough string already that I didn’t want to try it.

So, for me, this was the turnaround point.

This makes a hike of a little over 3 miles one-way from the canyon mouth. For the round trip, parking area to the high dryfall and back again, it’s more like 8.5 miles. Allow four hours or more.

There is a side hike possible, but unfortunately I did not take good notes and so my directions are approximate. If you are a confident navigator and able to find your way by compass and low animal cunning, what I remember may be of use.

Instead of bypassing the smaller fall, climb up the canyon wall to the right, pretty much due north. Work your way up the whitish slope into orange talus. It’s not bad going. Keep north, and then curve a bit northeast.

There’s a gully to your right. (If it’s on your left, you started to climb out of the main canyon too high up.) Parallel the gully, and watch for a dryfall where the gully changes from a steep nasty gulch to a passable little canyon. There’s a big smooth ledge of limestone or marble at the top of the dryfall, but you can’t see it very well until you’re above it on the hillside. 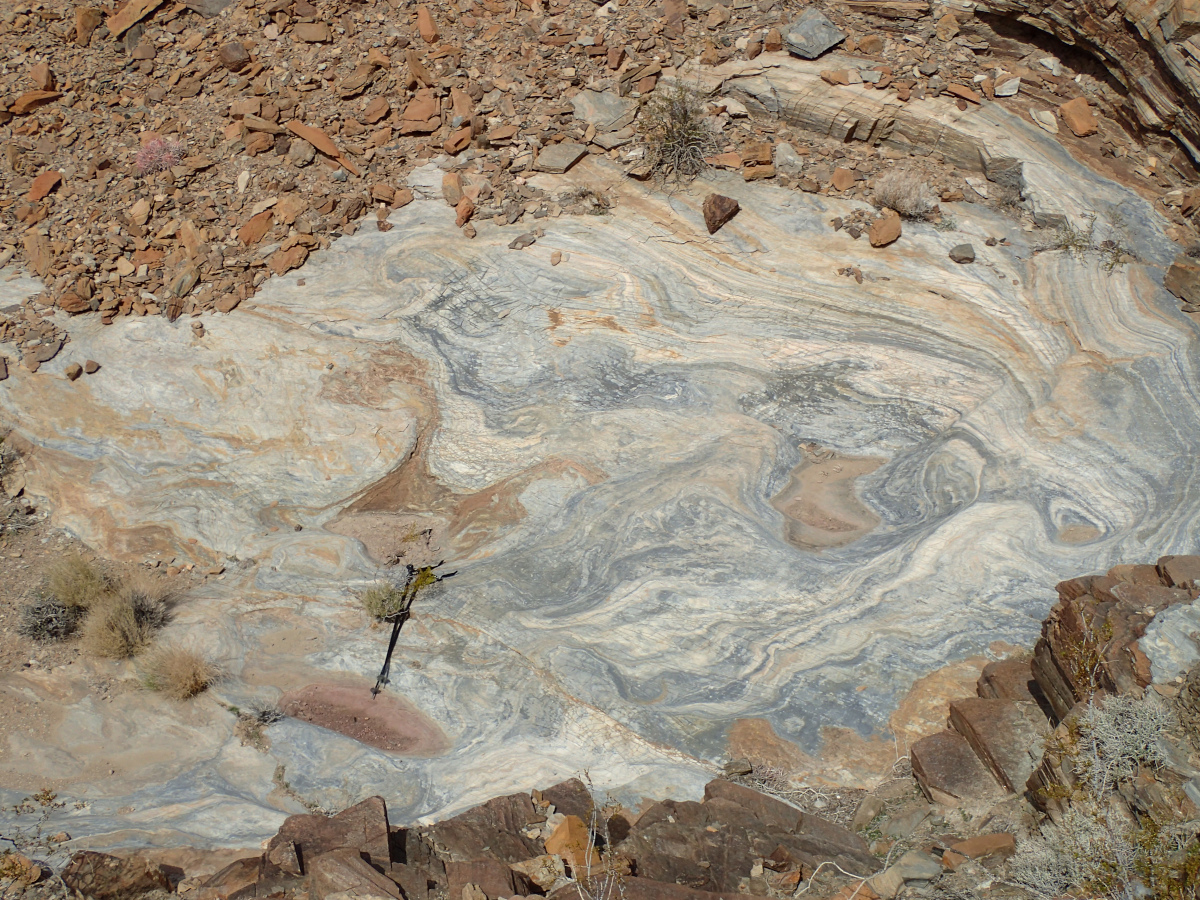 When you can see the fall and the ledge, head down to it. This is a pretty little canyon, and you can hike up it for several hundred yards. Along the way there’s a nice curving dryfall, easy to climb. 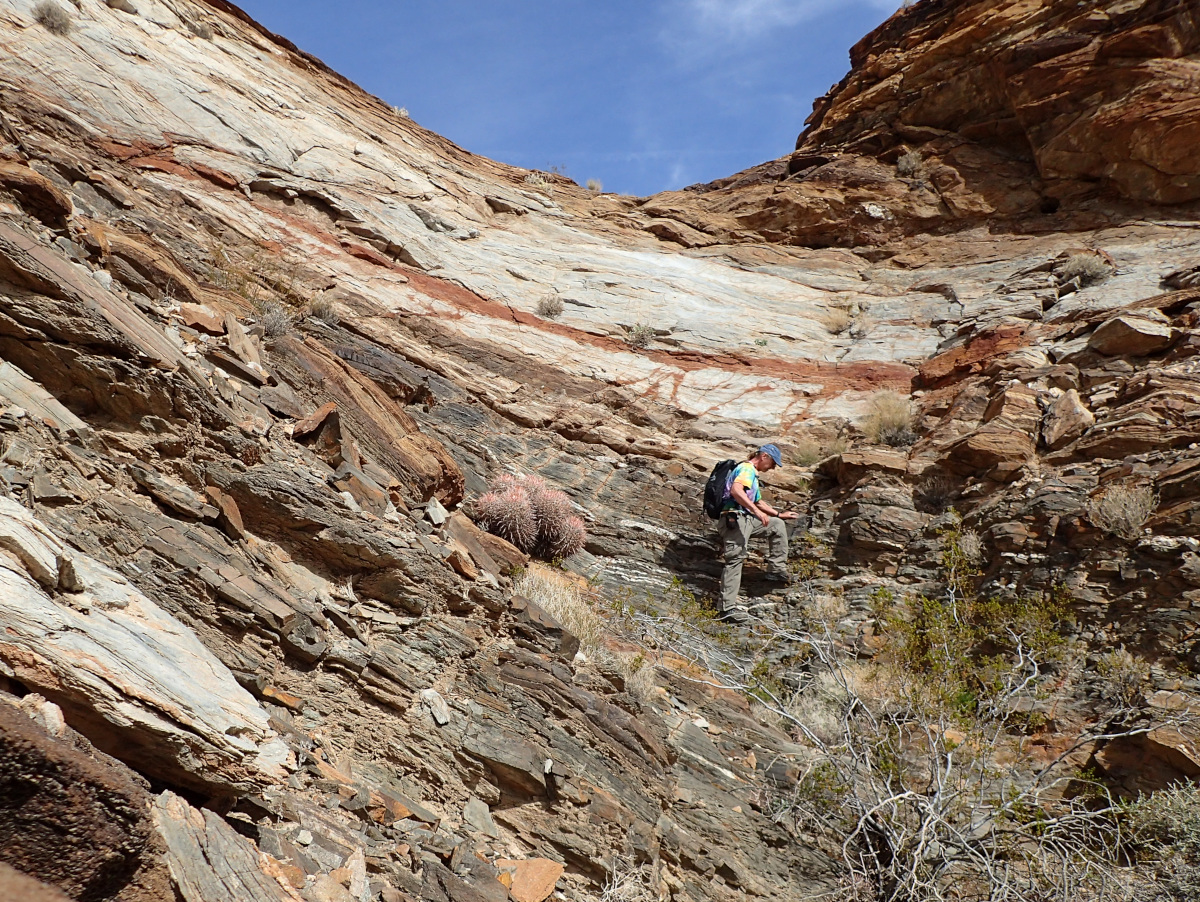 When the gully turns into a jumble of rock, or you lose interest, head for the ridgetop on the left (northwest) side of the gully. Depending on where you leave the gully, the slope may look something like the image below. 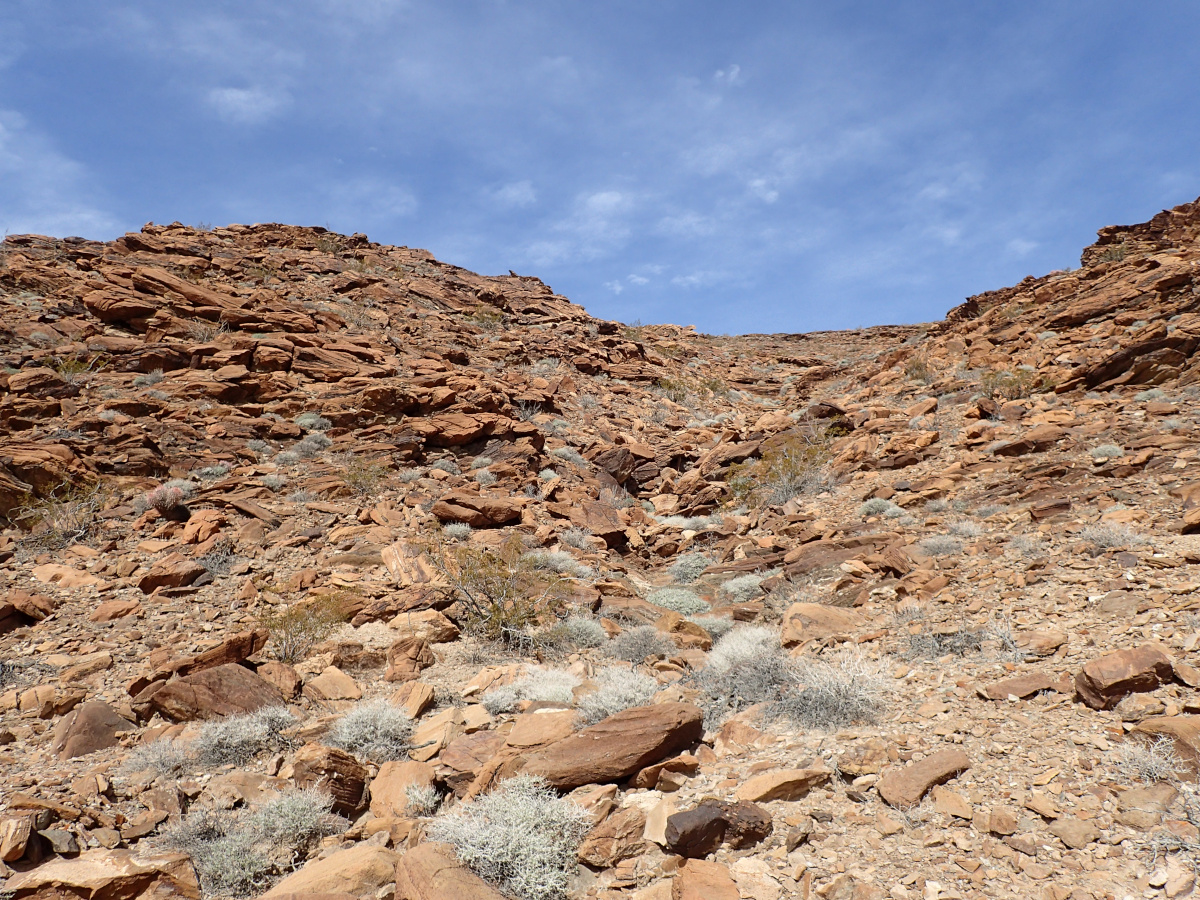 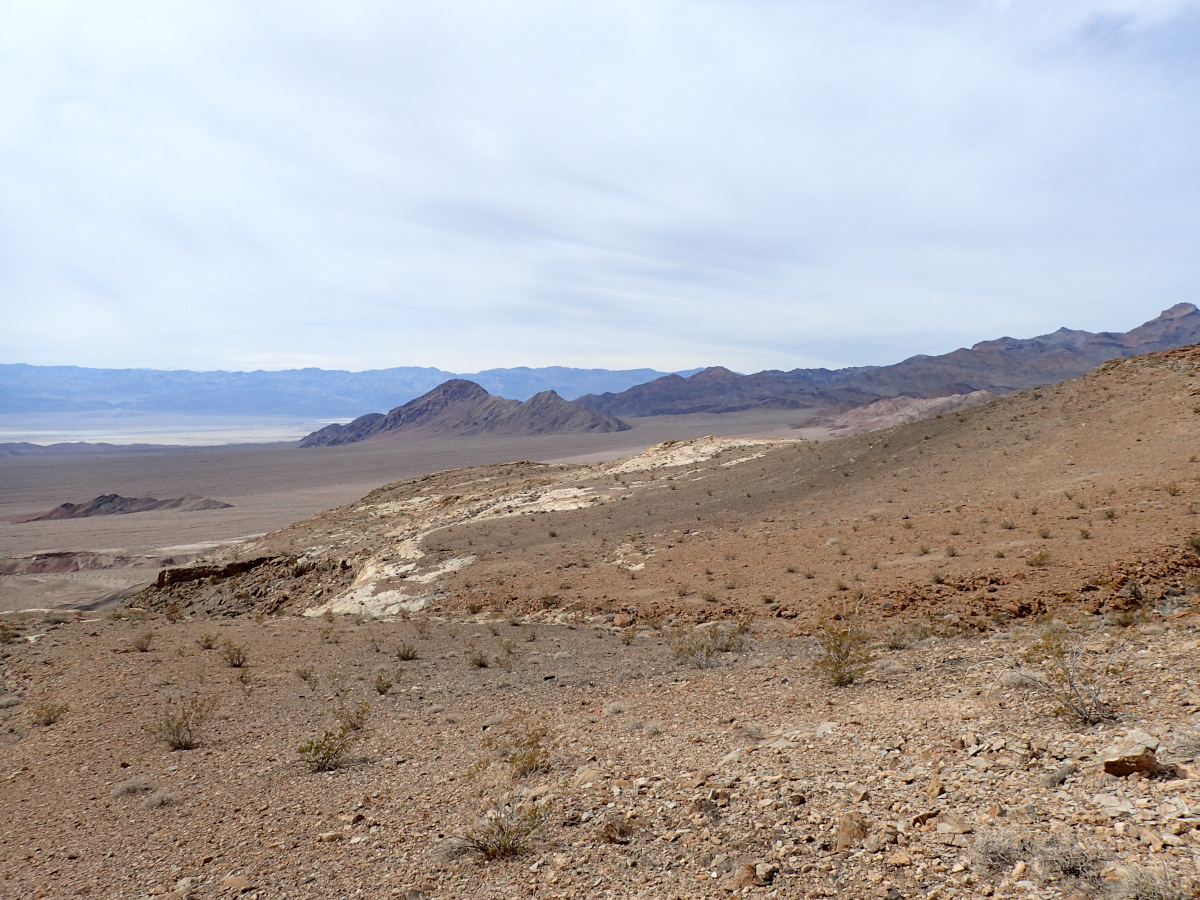 Head for those pale rocks, decimal coords 36.704931, -116.934475, GPS 36°42.29586', -116°56.0685'. (These coords are firm.) This is easy ground. Along the way you’ll pass above a magnificent horseshoe dryfall. The picture below is looking back at the dryfall after passing it – in other words, the picture above is looking at the pale ledge beyond the fall, and the picture below is looking back from the pale ledge at the place where the first picture was taken. Clear as mud? 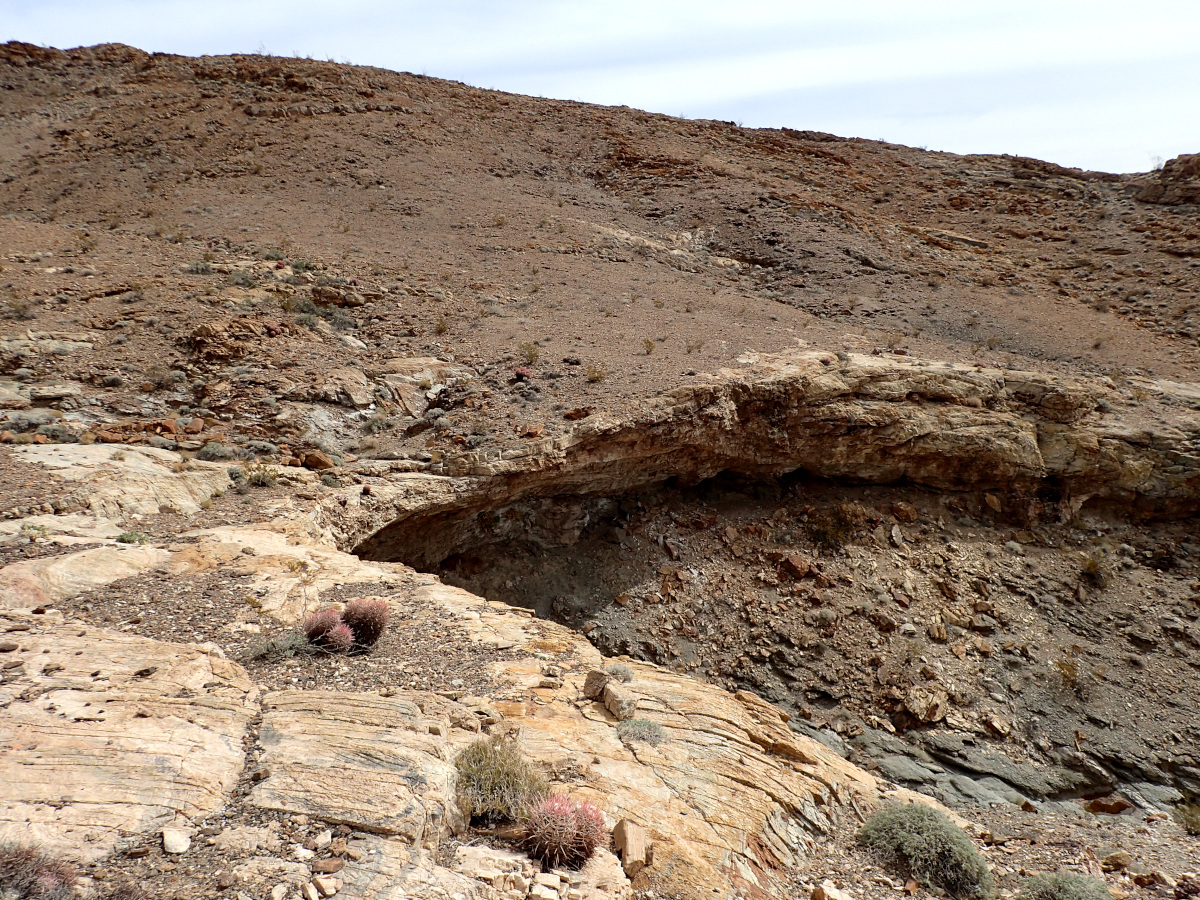 From the pale outcrops, head west and a little south along the ridge. Work down through the outcrops and gradually curve more to the south, down into the main canyon below. Surprise: you are now coming down through that rotten schist again, and onto the lower leg of the big bypass route.

Keep going down, and you will end up back in the main canyon below the first big dryfall.

I feel a little nervous putting this alternate route on the forum. Don’t try it unless you really are experienced at route-finding, and are confident that you can get yourself and your companions out of trouble if the route goes wrong.

On the other hand, a 64-year-old guy with the brains of a senile marmot managed it… take that for what you will.
Top

Re: Second canyon south of Monarch: finding the marbles

Great trip report! One thing that scares me is "64-year-old guy with the brains of a senile marmot" I thought I was the only one!
Top

Re: Second canyon south of Monarch: finding the marbles

Glad you enjoy the report... if I ever go back at least I'll have some clues for myself!

I don't know if it's like this for you, but -- I grew up poking around creeks and brushpiles and little rocks, and now, decades later, I'm still that darned kid, poking round in the outdoors. One guy I know, a wildlife photographer with a degree in entomology, told me "Yep, I started out catching bugs in a creek in Illinois, and now I'm still doing pretty much the same things, just in a little bit wider world."
Top
Post Reply
3 posts • Page 1 of 1